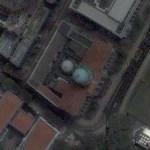 By DonMartini @ 2006-03-31 02:32:34
@ 1.289808, 103.851458
Singapore, Singapore (SG)
The old Supreme Court building was built between 1937 and 1939 on the site of the former Grand Hotel de L'Europe. The Chief Architect of the Public Works Department, Frank Dorrington Ward, came up with no fewer than eight variations on the design of the old Supreme Court building. This building was Ward's last and greatest work, and was acknowledged by many as his most significant creation.

The old Supreme Court building was declared open by Sir Thomas Shenton Whitelegge Thomas, Governor of the Straits Settlements, and handed over to the then Chief Justice, Sir Percy McElwaine, on 3 August 1939. The foundation stone of the Supreme Court building was laid by Sir Shenton Thomas on 1 April 1937, and was, at that time, the biggest foundation stone in the whole of Malaya. A "time capsule" containing six Singapore newspapers dated 31 March 1937, as well as a handful of Straits Settlements coins, was buried beneath the foundation stone. The time capsule is slated to be retrieved in the year 3000.

The imposing Corinthian and Ionic columns, as well as the tympanum sculpture fronting the Supreme Court Building, were the work of Cavalieri Rudolfo Nolli, a Milanese sculptor. The central figure in the tympanum is that of Justice, with a figure immediately to its left representing the lost soul begging for protection from it. Next to this figure are two legislators with books in hand, representing the law. To the right of Justice, a figure bows in gratitude, followed by a man with a bull, representing riches and prosperity. Two young children holding a sheaf of wheat represent abundance from law and justice.

Another point of interest for visitors is that the old Supreme Court building actually features two domes: the main copper-coloured dome which dominates Singapore's skyline, and a smaller dome which is hardly visible at street level, but which originally used to house a beautifully designed library.

The old Supreme Court Building was originally constructed to house just four courts. Due to an increasing workload, additional courtrooms were constructed in the adjacent City Hall in November 1986.
Links: www.supremecourt.gov.sg
918 views