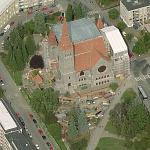 The cathedral is famous for its frescoes, painted by renowned symbolist Hugo Simberg between 1905 and 1906. The paintings aroused considerable critique in their time[1], featuring versions of Simberg's The Wounded Angel and The Garden of Death. Of particular controversy was Simberg's painting of a winged serpent on a red background in the highest point of the ceiling, which his contemporaries interpreted as a symbol of sin and corruption.
Links: www.muuka.com
607 views