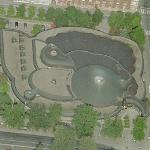 The architects said they had been influenced by various elements, such as Celtic ornaments, sheep horns and glacial spin formations. The constructional basic idea was space coiling spirally like the shell of a snail. The form of a bird appeared in the design process. Increasingly, the building began to resemble a large game bird - capercaillie. In fact, the library is known under the Finnish name "Metso". Seen from above, the building looks like a bird carrying a shield.
Links: www.tampere.fi
695 views