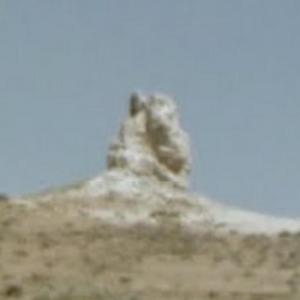 By kjfitz @ 2009-12-22 15:17:47
@ 43.233198, -106.314248
Natrona, Wyoming (WY), US
Teapot Rock is a distinctive rock formation in Natrona County, Wyoming that lent its name to a nearby oilfield that became notorious as the focus of a bribery scandal during the Presidential administration of Warren G. Harding, the Teapot Dome scandal. The rock is a sandstone formation about 25 miles (40 km) north of Casper. The outline of the rock once resembled a teapot and gave its name to the nearby geological formation that encompassed the Teapot Dome Oilfield. The Teapot Dome field was one of several such oilfields in the area, and was in 1915 designated Naval Petroleum Reserve Number Three as part of a program to ensure that the U.S. Navy, which was converting to oil-fired boilers at the time, would have sufficient fuel reserves in an emergency.