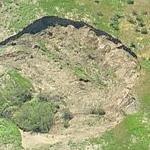 By kjfitz @ 2009-09-02 09:47:36
@ 37.855867, -122.199906
Berkeley, California (CA), US
A Slump is a form of mass wasting event that occurs when loosely consolidated materials or rock layers move a short distance down a slope. The landmass and the surface it slumps upon is called a failure surface. When the movement occurs in soil, there is often a distinctive rotational movement to the mass, that cuts vertically through bedding planes (landslides take place along a bedding plane or fault). This rotational movement moves along a curved slip surface of regolith (the failure surface) which overlies bedrock. This results in internal deformation of the moving mass consisting chiefly of overturned folds called "sheath folds." The surface of the mass often remains relatively undisturbed, especially at the top. However, hummocky ridges may form near the toe of the slump . The cut which forms as the landmass breaks away from the slope is called the "scarp" and is often cliff-like and concave.
834 views