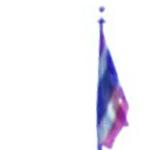 By kkeps @ 2011-10-17 14:11:27
@ 41.895334, -87.625463
Chicago, Illinois (IL), US
The flag of the Kingdom of Thailand shows five horizontal stripes in the colours red, white, blue, white and red, with the middle blue stripe being twice as wide as each of the other four. The design was adopted on 28 September 1917, according to the royal decree about the flag in that year; the Thai name for the flag is ธงไตรรงค์ (Thong Trairong), meaning tricolour flag. The colours are said to stand for nation-religion-king, an unofficial motto of Thailand, red for the land and people, white for Theravada Buddhism and blue for the monarchy, as having been the auspicious colour of King Rama VI. As the king had declared war on Germany that July, some note the flag now bore the same colours as those of Britain and France.
Links: en.wikipedia.org
570 views