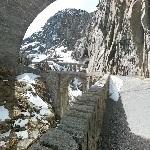 Legend states this particular bridge was built because herdsman found the river difficult to ford and wished the devil would make the bridge. The devil appeared but required that the first soul to cross would be given to him. The herdsman agreed, sending a goat across. This angered the devil and he threw a rock with the intention of smashing the bridge, but an old woman drew a cross on the rock and the devil couldn't lift it. The rock is still there, although the Swiss moved it 127 meters near Göschenen in 1977 to make room for the new Gotthard road tunnel.

The bridge carried only foot traffic until 1775.
Links: en.wikipedia.org
372 views