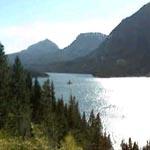 Saint Mary Lake in the Glacier National Park was used early in the film as Jack and family travel to The Overlook Hotel in Colorado.
Links: www.imdb.com, www.youtube.com
2,829 views