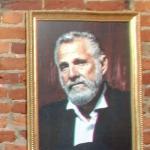 By Tyco @ 2013-02-12 12:18:31
@ 38.937534, -76.990735
Washington, Washington, DC (DC), US
The Most Interesting Man in the World is an advertising campaign for the Dos Equis brand of beer, produced by the marketing firm Euro RSCG for Cuauhtémoc Moctezuma Brewery.[1] The ads feature Jonathan Goldsmith as "the world's most interesting man" and are narrated by Frontline's Will Lyman.[2] Goldsmith has stated that his friend, actor Fernando Lamas, was an inspiration in creating the character.[3] The advertisements first began appearing in the United States in 2006

Jonathan Goldsmith (born September 26, 1938) is an American actor. He began his career on the New York stage, then started a career in film and television. He appeared in several TV shows from the 1960s to the 1990s. He is best known for appearing in television commercials for Dos Equis beer, beginning in 2007, as the character The Most Interesting Man in the World, in which he speaks with a distinctive deep voice inspired by his deceased sailing partner and friend Fernando Lamas.
Links: en.wikipedia.org
544 views