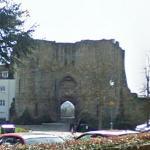 The twin towered gatehouse was built by Richard de Clare, sixth Earl of Hertford or his son Gilbert. Construction of the gatehouse took 30 years, being completed in 1260.
Links: en.wikipedia.org
439 views