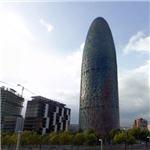 By kjfitz @ 2009-09-24 14:00:18
@ 41.404498, 2.188538
Barcelona, Spain (ES)
The Torre Agbar, or Agbar Tower, is a 33-story tower at Plaça de les Glòries Catalanes, Barcelona, Catalonia, Spain. It was designed by French architect Jean Nouvel in association with the Spanish firm b720 Arquitectos and built by Dragados. It opened in June 2005 and was inaugurated officially by the King of Spain on 16 September 2005. The Torre Agbar is located in the Poblenou neighborhood of Barcelona and is named after its owners, the Agbar Group, a holding company whose interests include the Barcelona water company Aigües de Barcelona.
Links: en.wikipedia.org
675 views