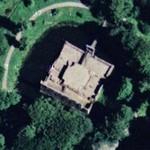 The castle was built in 1300-the figure of a 30 x 30 m large knock. Trøjborg mentioned in 1347 in a letter from Duke Valdemar of Jutland by Duke Valdemar Atterdag castle. In 1407 came the Queen Margrethe's possession, but later pledged it down to Ribe bishop.

After the Reformation in Denmark in 1536 they passed to ecclesiastical estates crown and King Frederik 2 ceded the castle to Daniel Rantzau as thanks for his merits in the war against the Swedes. Around 1580 appeared Peter Rantzau build a Renaissance palace on the spot. Since Rantzau genus became extinct in 1658, the castle fell into disrepair slowly.

In the 1800s, was the owner, farmer Knud Knudsen Lausten plans to establish a teacher training college on the spot, but when these plans were not realized, the castle was demolished in 1854. Parts of the southern wall and the basement is preserved.
Links: da.wikipedia.org
586 views