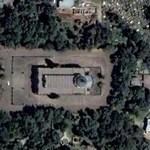 By DonMartini @ 2008-02-02 07:10:17
@ 9.030826, 38.766713
Addis Ababa, Ethiopia (ET)
Trinity Cathedral in Addis Ababa commemorates Ethiopia's liberation from five years of Italian occupation. It is also the second most important place of worship in Ethiopia (after St. Mary's in Axum), and the highest ranking of Addis Ababa's four Orthodox cathedrals.

The Church of the Holy Trinity was founded by Emperor Menelik II soon after he moved his imperial capital from Mt. Entoto to Addis Ababa. The original church, built of wood with intricate carvings, was constructed with the help of artists from India. Located close to the Imperial Palace, it was frequently visited by the royal family.

Trinity was made the burial ground for those who fought against the Italians both inside the country and in exile. No other persons, other than high clergy, are allowed to be buried on the grounds of the Cathedral itself (although there are a public cemetery and a public masoleum behind it). Emperor Haile Selassie built a mausoleum for his family in the crypt under the Cathedral, and the Imperial family continue to use it as their tomb.

Trinity Cathedral has been the site of many great church and state ceremonies, including the enthronements of the Patriarchs of the Ethiopian Orthodox Church and the consecration of all Archbishops and Bishops.
Links: www.sacred-destinations.com
1,093 views