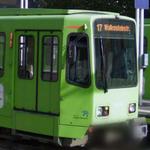 The vehicle can serve both high platforms and street-level stops; it has cabs at both ends, thus eliminating the need for turning loops. It was unique in Germany at the time for featuring thyristor chopper control and a contemporary design by Prof. Herbert Lindinger.