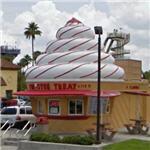 The original company, which had 23 locations in Florida, went into bankruptcy in the early-1990s. A new Twistee Treat company, based in Warrensburg, Missouri, was formed in 1996. As of 1999, the new company had 35 locations in Florida and Missouri.
Links: en.wikipedia.org
958 views