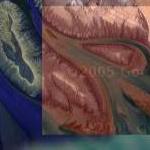 From the Advisory Body Evaluation:
The waters of the Upper Gulf and Colorado River Delta are shallow (50-200m) and becoming more saline (to 35.5ppm) as a result of the upstream diversions of the
Colorado River, which started in 1909. But they have a variety of intertidal wetlands and sandy and rocky coasts of coquina (cemented molluscs). The sea floor is mud
and silts near the delta, sandy and rocky further south. In this area there are 18 species of marine mammal. One of most important for conservation is the so-called
"vaquita", or Gulf porpoise, which is one of the world’s four rarest marine mammals. There are also sea lion, 5 species of dolphin, 11 species of whales and 161
species of fish, 42 of them endemic. Marine invertebrate include 35 species of mollusc and 190 decapods.
Links: whc.unesco.org
2,517 views