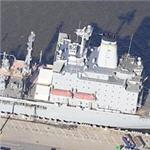 By kjfitz @ 2006-04-08 16:02:29
@ 36.959728, -76.327274
Norfolk, Virginia (VA), US
These ships conduct underway replenishment in support of operating forces by simultaneously providing POL from five stations (two starboard and three port); fleet freight, mail, personnel and other items from two stations (one starboard and one port) for periods normally not to exceed thirty-two hours per week. UNREP hours are considered to commence with “first line over” and terminate with “last line clear”. They conduct vertical replenishment in support of operating forces by providing fleet freight, personnel, mail and other items from one helicopter platform with helicopters from other units for periods normally not to exceed 20 hours per week. This includes the time from the setting of flight quarters to securing from flight quarters.

There are stations on both sides of each ship for underway replenishment of fuel and stores. Equipped with 5 fueling stations, they can replenish two ships at a time pumping up to 900,000 gallons of diesel fuel and 540,000 gallons of jet fuel per hour. These ships have a capacity for small quantities of fresh and frozen provisions, stores, and other materials which will permit full replenishment of some of their customers. With a dry cargo carrying capacity of 7,400 square feet and refrigerated deck vans that can hold up to 128 pallets of chilled food, they can deliver fleet cargo, mail, and provisions via CONREP (connected replenishment) from two dry cargo rigs or via VERTREP (vertical replenishment) on the helo deck.
Links: www.globalsecurity.org
1,283 views