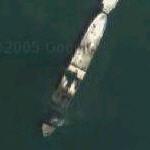 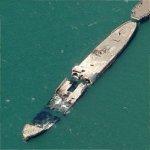 The Palo Alto was built as an oil tanker by the San Francisco Shipbuilding Company in Oakland, California and launched May 29, 1919. She is the sister ship of the S. S. Peralta.

The Palo Alto remained docked in San Fransisco Bay for over ten years until she was purchased by the Seacliff Amusement Company of Nevada and towed to Seacliff State Beach in Aptos, California. The ship was grounded in the bay and connected to the shore by a long pier. An arcade, dining room, dance hall and even a swimming pool were built on the ship.

Unfortunately, the Seacliff Amusement Company went out of business two years later under the financial crunch of the Great Depression. Then, in winter, a storm cracked the ship across her midsection. The Palo Alto was stripped of all salvagable metal and fixtures and turned into a fishing pier.
Links: www.concreteships.org
3,139 views