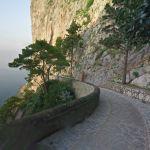 Commissioned by the German industrialist, Friedrich Alfred Krupp, the pathway was built in the early 1900’s, overcoming a difference in height of approximately 100 meters,
Via Krupp was designed and realized by the engineer Emilio Mayer, who cut through the rock until the sea, creating a series hairpin bends set so close together they appear almost to overlap.

Observing the path from on high or walking along the winding route, one is inevitably struck by such an incredible feat of engineering and artistic genius, made all the more captivating by the typically Mediterranean vegetation which spontaneously grows along the path.

Along Via Krupp there is a small gate marking the way to the Grotta di Fra’Felice, where Krupp built his villa and, a little further on, a steep and crumbling pathway which leads to the Grotta dell’Arsenale, resting four meters above sea level. A favorite nudist spot, the more adventurous enjoy swimming here, despite the almost constant danger of falling rocks.

Via Krupp has been recently repaired, but the rock face above the road is not secure, especially on very windy days.

Access to the road is barred by a gate and the path can be observed only from on high.
Links: www.capri.com
1,828 views