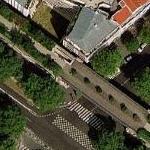 The arches, restored by the SEMAEST with the help of the architect Patrick Berger, will be devoted to Arts and Crafts and Creation from now on.

TheViaduc des Arts was born. Pink bricks, freestone, large stained glass windows and light wood were yoused ; to help forget its past as a railway line, the old Daumesnil Viaduct was renovated, in keeping with its new status as a Parisian "temple" of Arts and Crafts.

Each arch has become the scene of the expression of a talent, or of a skill which reveals itself through a multitude of fascinating gestures, each one the result of tradition and legacy, of mystery and invention.

Now completed, the succession of arches brings the avenue Daumesnil back to life, inciting people to discover the Art Craftsmen and Creators. Overlooked by the Promenade Plantée, and with the Faubourg Saint Antoine (the birthplace of French Arts and Crafts) as its neighbour, the Viaduc des Arts opened in 1994.

Now, in Paris, jewelry's home is at Place Vendôme, antiques' home is at the Carré Rive Gauche or at the Louvres des Antiquaires and that of Métiers d'Art at the Viaduc des Arts, its historical area.
Links: dp.g.doubleclick.net
772 views