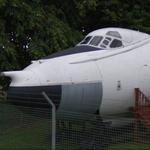 The Valiant was originally developed for use as high-level strategic bomber. When the other V-bombers came into use it was also used as a tanker. However, when the RAF moved to low-level attacks, low-level flying in the Valiant, along with the choice of an inappropriate type of aluminium alloy used for the manufacture of the wing spar attachment castings, caused premature fatiguing with inter-crystaline corrosion. Rather than repair or rebuild the fleet, it was grounded and the Handley Page Victor took over the tanker role.
Links: en.wikipedia.org
2,016 views