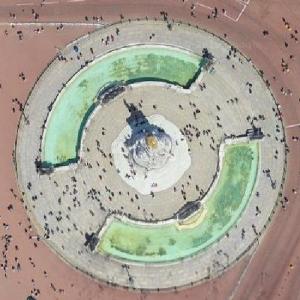 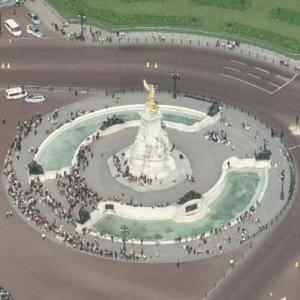 It was built by the sculptor Sir Thomas Brock, in 1911. The surround was constructed by the architect Sir Aston Webb, from 2,300 tons of white marble. It is a Grade I listed building.

It has a large statue of Queen Victoria facing north-eastwards towards The Mall. The other sides of the monument feature dark patinated bronze statues of the Angel of Justice (facing north-westwards toward Green Park), the Angel of Truth (facing south-eastwards) and Charity facing Buckingham Palace. On the pinnacle, is Victory with two seated figures. The subsidiary figures were gifted by the people of New Zealand.

The whole sculpture has a nautical theme, much like the rest of the mall (Admiralty Arch etc). This can be seen in the mermaids, mermen and a hippogriff, all of which are suggestive of Great Britain's naval power.
Links: en.wikipedia.org, moviemaps.org
925 views