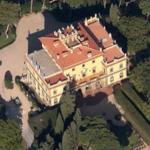 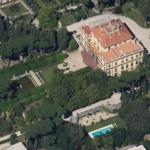 The villa was built in 1922 by count Elia and was thus called Villa Elia at the time. Previously, it was known as Villa di San Valentino because it is perched atop the homonymous hill and it had on its grounds a complex that once belonged to the archeologist Antonio Bosio, author of Roma sotterranea, which was published posthumously, in 1632. Bosio left it as inheritance to Order of Malta. Successive owners are not known.

The house, in Neo-Renaissance style, which was much in fashion at the time, was designed by the architect and academic Carlo Busiri Vici, who designed the Palazzo Giorgioli in Via Cavour, Palace Hotel in Via Veneto, Villa Taverna in Viale Rossigni and various other buildings in Rome.

In 1945, the villa became the seat of the Embassy of Portugal to the Holy See and took the name Villa Lusa, from Lusitania, an ancient Roman region and province that roughly corresponds to modern-day Portugal.
492 views