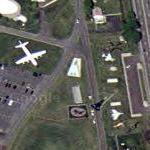 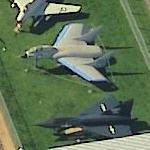 By kjfitz @ 2005-07-21 12:33:22
@ 40.201718, -75.139741
Willow Grove, Pennsylvania (PA), US
The Vought F7U Cutlass was a United States Navy carrier-based jet fighter and fighter-bomber of the early Cold War era. It was a highly unusual, semi-tailless design, allegedly based on aerodynamic data and plans captured from the Arado company at the end of World War II, though Vought designers denied any link to the German research at the time. The F7U was the last aircraft designed by Rex Beisel, who was responsible for the first fighter ever designed specifically for the US Navy, the Curtiss TS-1 of 1922.