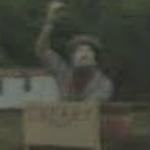 Back in the '60s he lived at the Eastwood Mall in Birmingham, AL. He was seated on the covered wagon at a Wagon Ho restaurant, a short-lived fast food chain in the mid-1960s. He held a whip in one hand and reins in the other. After Wagon Ho shut down the business became Kelly's Hamburgers and he continued at his post until Kelly's closed down. Sometime after that he was moved to the country outside Moody, where he currently sits at the abandoned Cherry Construction company lot. He is missing his left hand.
329 views