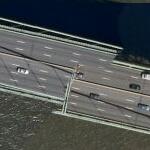 By daggerwell @ 2007-02-18 12:37:23
@ 39.905615, -75.13107
Philadelphia, Pennsylvania (PA), US
The Walt Whitman Bridge is a suspension bridge spanning the Delaware River from Philadelphia to Gloucester City, New Jersey. Named after the poet Walt Whitman, who resided in nearby Camden toward the end of his life, the Walt Whitman Bridge is one of the larger bridges on the east coast of the United States. The bridge is owned and operated by the Delaware River Port Authority.
Links: en.wikipedia.org
806 views