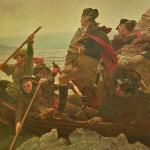 By daggerwell @ 2012-05-31 05:56:43
@ 40.780672, -73.963418
New York, New York (NY), US
Washington Crossing the Delaware is an 1851 oil-on-canvas painting by German American artist Emanuel Gottlieb Leutze. It commemorates General George Washington's crossing of the Delaware River on the night of December 25–26, 1776, during the American Revolutionary War. That action was the first move in a surprise attack against the Hessian forces at Trenton, New Jersey in the Battle of Trenton.

The painting is part of the permanent collection of the Metropolitan Museum of Art in New York City.
Links: en.wikipedia.org
482 views