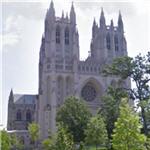 The cathedral is the seat of both the presiding bishop of the Episcopal Church and its bishop of the Diocese of Washington, composed of the District of Columbia and the Charles, Montgomery, Prince George's, and St. Mary's counties in Maryland. It is an associate member of the Washington Theological Consortium.
Links: en.wikipedia.org
757 views