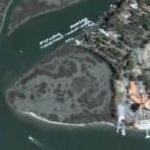 By Lamos @ 2008-02-10 14:17:25
@ 32.00585, -80.999117
Savannah, Georgia (GA), US
Yachting venue olympic 1996. In addition to the four racecourses—course A in Wassaw Sound and B, C, and D in the Atlantic
Ocean—the yachting venue included a satellite
Olympic Village in downtown Savannah, an
Olympic marina on Wilmington Island, and a
temporary day marina on the northern side of
Wassaw Sound. The Riverfront Marriott, locatedin the historic district, served as the satellite
Olympic Village. Sail Harbor Marina on Wilmington
Island, located about 15 mi (24 km)
southeast of the Village, was the site of the
Olympic marina, and the day marina was a
150,000 sq ft (14,000 sq m) barge moored at
the mouth of the Wilmington River.

The day marina, the first of its kind to be
used at an Olympic Games, enabled athletes
to store their boats safely and securely in
close proximity to the racecourses, thus eliminating
the long sail or tow for all events except
the keelboats (Solings and Stars). The National
Weather Service provided significant
on-site support with excellent, highly detailed
forecasting.
Links: en.wikipedia.org
2,583 views