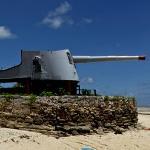 SpiderX22
@ 2013-12-11 13:40:26
One of the two Japanese shore batteries on Tarawa which mounted Japanese Type-41 200mm guns built in England in 1908. During the US assault of Tarawa in November 1943, this gun mount briefly engaged American Destroyers and Battleships closing in on the island before it was knocked out by fire from the USS New Mexico (BB-40), which scored a direct hit on the guns barrel with a 14-inch shell.

Today the gun and its support base are intact and still bear the damage inflicted on them during the Battle of Tarawa.