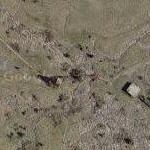 A 200 acre functional model of the entire Mississippi River drainage area, located on a field surrounded by forests, and now abandoned. Constructed by the Army Corps of Engineers to model the flow characteristics of the river, as part of the design process for their numerous flood control structures. Built in the late 1940's, initially using forced labor from a German POW camp established next to the site, and used last in the early 1980's, the model is in a public park, and is still owned by the Army Corps.
Links: clui.org
3,807 views