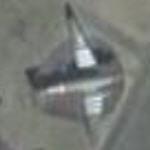 Pressed into service in World War II, it became the major transport for the allies. It also carried cargo, dropped paratroops and served as a glider tow vehicle in support of major airborne operations such as D-Day and Operation Market Garden. Many of them served with the RAF as Dakotas.

C-47s played a major role in the Berlin Airlift and in Korea. Others were sold to the civilian market and, from these aircraft, many an airline was born. The C-47 saw service well into the Vietnam Conflict era. A gunship version , code named "Puff the Magic Dragon", supported ground troops until being replaced by AC-130 Spectre gun ships.

The aircraft on display at Castle Air Museum saw military service from 1944 to 1946, where it primarily flew transport duties in the Caribbean area. It later served as an airways inspection aircraft for the FAA, flight checking radio navigation facilities and instrument landing systems.
Links: www.elite.net
3,093 views