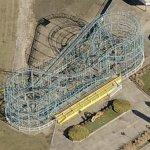 2014 update - by looking at historical satellite photos in Google Earth, this roller coaster was removed sometime between 2006-2009. However, many of the park's structures are still there.
Links: en.wikipedia.org
5,490 views