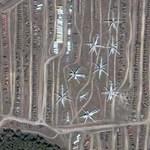 By DonMartini @ 2008-02-25 16:20:42
@ 51.154141, 29.983481
Potoky, Ukraine (UA)
The explosion of a reactor at the Chernobyl power station, Ukraine, in April of 1986 was the worst civilian nuclear disaster in history. A radioactive cloud burst from the reactor and contaminated Ukraine, Belarus, and neighboring parts of Russia before the wind carried it all over Europe. The 120 surrounding districts were evacuated, though belatedly. The precise number of victims remains unknown today, but it is estimated that several million people are suffering from illnesses linked to radiation, such as cancer and immune deficiencies. In December 2000, the power station’s last reactor—which had remained in service to supply 9 per cent of the country’s electricity—was finally shut down in exchange for $2.3 billion in Western aid, which will allow two new nuclear facilities to be built. The nuclear industry has not yet resolved the problem of disposing of waste that will remain highly radioactive for many years. This waste, produced by 433 reactors in thirty-two countries, accumulates in storage centres.
Links: www.artificialowl.net
13,791 views