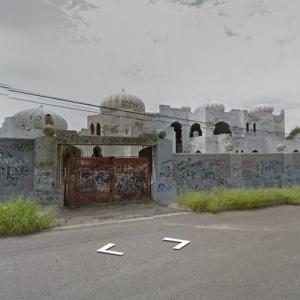 By Xeba73 @ 2014-01-08 05:40:29
@ 29.1047465, -110.9394761
Hermosillo, Mexico (MX)
Mexican drug lord Amado Carillo’s house, known as el Palacio de Mil y Una Noches (Palace of 1001 Nights), was a 2,500-square-meter mansion in Hermosillo, Sonora, Mexico. Inspired by the book of the same name (also known as Arabian Nights), Carillo began construction on the middle-eastern style complex in 1992. The house featured several hot tubs, a pool, and a system of escape tunnels fit for such a notorious criminal. The property, estimated to be worth $5 million at the time, was seized by the Mexican government in 1993, and though it was eventually returned to Carillo’s family, construction was never completed. Sale of the property was unsuccessfully attempted in 2006 and in it was ordered to be demolished by Eduardo Bours, the Governor of Sonora, in 2009. Demolition did not begin in earnest until 2020.

Carillo, known as “Lord of the Skies” was capo of the Juarez cartel in the 1990s. Using a fleet of private jets to smuggle cocaine, he amassed a $25-billion empire. In 1997, As Mexican and U.S. authorities closed in on his operation, he underwent substantial plastic surgery in an attempt to evade capture. He died at Santa Monica Hospital in Mexico City on July 4, 1997 after complications from these operations. The physicians who performed the operation were found dead in November, 1997, having been tortured and encased in concrete.

Carillo has been portrayed in the media for several television series and films, including the hit Netflix series Narcos and Narcos: Mexico, in which he is portrayed by actor Jose Maria Yazpik.
Links: en.wikipedia.org
25,098 views