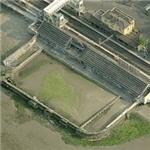 By kjfitz @ 2009-08-21 08:47:24
@ 53.303018, -6.178926
Blackrock, Ireland (IE)
These Baths were built in the nineteenth century and much used until late in the last century have become somewhat of an eyesore on the DART Line with dilapidation and graffiti. There is uncertainty surrounding the safety of bathing in sea water baths filled from the Irish Sea, as distinct from swimming in the open sea itself, due to the continued operation of Sellafield in Great Britain.

The Blackrock baths have fallen into dilapidation since their closure and have been sold to developers Treasury Holdings, who have raised the possibility of building high-rise apartments on the site.
Links: www.fantasyjackpalance.com
543 views