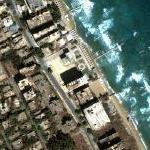 Many new high rise buildings and hotels were built prior to the war to cater to the increasing number of tourists coming to Famagusta, then the number one tourist destination in Cyprus.

In 1974 Varosha was made part of the UN Buffer Zone separating the two sides. The Turkish army has however refused to hand control of Varosha over to the UN and continues to maintain a presence in the ghost town. Today Varosha is not accessible by anyone except Turkish military and UN personnel, and the buildings are slowly falling apart. On the positive side, rare sea turtles have begun nesting on the deserted beaches.

Please look also at the external links in the link below for more pictures.
Links: en.wikipedia.org
12,351 views

Anonymous
@ 2009-01-24 07:15:28
Can you see the area of Beach under occupation with cars parked and many neatly laid out sunbeds and umbrellas? Are these few hotels down the coastline from Palm Beach towards the south used by the Turkish Army?

These sights chill my soul, how sad beyond words this once beautiful and thriving place, home to many happy families continues to lie decaying.