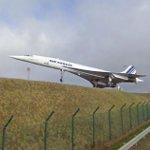 By WacoKidd110 @ 2013-02-21 10:32:22
@ 49.010093, 2.553024
Paris, France (FR)
Aérospatiale-BAC Concorde is a retired turbojet-powered supersonic passenger airliner or supersonic transport (SST). It is one of only two SSTs to have entered commercial service; the other was the Tupolev Tu-144. Concorde was jointly developed and produced by Aérospatiale and the British Aircraft Corporation (BAC) under an Anglo-French treaty. First flown in 1969, Concorde entered service in 1976 and continued commercial flights for 27 years.
Links: en.wikipedia.org, virtualglobetrotting.com
733 views