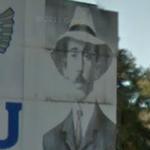 Santos-Dumont designed, built, and flew one of the first practical dirigibles. By doing so he demonstrated that routine, controlled flight was possible. This "conquest of the air", in particular his winning the Deutsch de la Meurthe prize on October 19, 1901 on a flight that rounded the Eiffel Tower, made him one of the most famous people in the world during the early 20th century.
Links: en.wikipedia.org
288 views