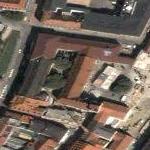 By kjfitz @ 2005-06-26 02:28:32
@ 48.138185, 11.578088
Munich, Germany (DE)
This castle, the residence of the Bavarian royal family since 1253, was built to the north-east of the city so as to protect the Emperor against possible uprisings by the citizens of Munich. The remains of the castle, with its late-Gothic bay window (known as the 'Affenturm'), the gatehouse to the north and the enclosure to the west, form the oldest group of medieval buildings in the city. Although, of course, the buildings have been reconstructed several times over the centuries, most notably in the nineteenth century and after the Second World War. (orbitz.com)
Links: orbitz.wcities.com
874 views