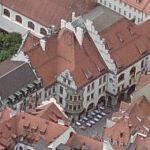 jbottero
@ 2008-06-20 04:25:54
On 24 February 1920 Adolf Hitler organized the first of many large publicity and propaganda events to be held at the Munich Hofbräuhaus. During this event he outlined a twenty-five point programme of ideas, which were to become the basis of the Nazi Party.