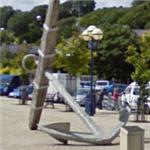 In 1796, Theobald Wolfe Tone and the United Irishmen attempted to land a formidable French armada, commanded by Admiral Hoche in Bantry bay. It was intended to expel the British and establish an Irish Republic. The armada consisted of 50 naval warships and 15,000 men. Richard White, having heard about the invasion had trained a militia to oppose the landing as he and his tenants were loyal to the British crown. Munitions were stored in Bantry House for safe keeping. Look outs were posted on Both Mizen Head and Sheep's Head to send warning of an invasion. In the end the French armada never had a chance of landing. The weather was too severe, and even ship to ship communication was too difficult. 10 ships were lost. One of these 'The Surveillante' remained on the bottom of Bantry bay for almost 200 years.

The ship was discovered in 1982. In 1985 it was declared a national monument and work began on the excavation, preservation and exhibition of the ship and its contents.
Links: en.wikipedia.org
1,331 views