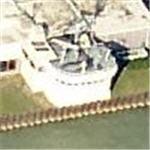 By kjfitz @ 2009-09-04 12:13:08
@ 42.334539, -82.985077
Detroit, Michigan (MI), US
The SS William Clay Ford was a bulk freighter built for hauling material on the Great Lakes. She was named for William Clay Ford, Sr., grandson of Henry Ford, Sr. Her keel was laid in 1952 at River Rouge, MI by the Great Lakes Engineering Works, and she was launched in 1953. She was a part of the Ford Motor Company fleet of ore carriers and made her home port at the Ford's River Rouge Plant, south of Detroit, Michigan. The first captain of the William Clay Ford was John Jameson Pearce of Dearborn, Michigan.

On the night of November 10, 1975, the lake freighter SS Edmund Fitzgerald was reported lost. The SS William Clay Ford was one of two ships involved in the initial search.

In August 1986, US 266029 was towed from her moorings to the Detroit Marine Terminal where the pilot house was removed for display at the Dossin Great Lakes Museum on Detroit's Belle Isle.
Links: en.wikipedia.org, upload.wikimedia.org
2,931 views