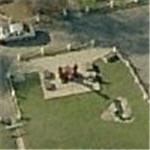 On January 7, 1974, the Fitzgerald lost her bow anchor while docked on the Detroit River. The 12,000-lb anchor remained there at the bottom of the Detroit River until it was recovered on July 20, 1992. Today, the anchor stands outside of the Dossin Great Lakes Museum as a tribute to the memory of the SS Edmund Fitzgerald and her crew.
Links: en.wikipedia.org
3,419 views