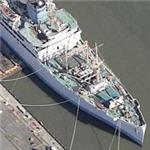 After the academy got a newer ship in 1995, an Oakland artist dreamed of converting the Golden Bear into a floating center for arts and intellectual activities. Rechristened the Artship, it was taken out of the Mothball Fleet in Suisun Bay in 1999 and towed to Oakland, where it was anchored at the port until it became clear that the project could not get enough funding.

Sold for scrap in 2004, the Artship was moved to the closed Mare Island shipyard and was going to be taken to Texas until the Environmental Protection Agency said hazardous materials such as PCBs had to be cleaned up first.
Links: www.maritimematters.com
1,927 views