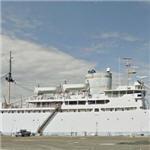 The US Government requisitioned the SS Delorleans on 3 June 1941.

She took part in Invasion of Guadalcanal, Invasion of Bougainville, Invasions of Peleliu and Leyte, and was then converted to hospital ship.

In May 1971, she was loaned by the Maritime Administration (MARAD) to the California Maritime Academy who renamed her TS Golden Bear. She sailed on 28 major ocean cruises over 24 years. In 1995 she was returned to MARAD and the Reserve Fleet.

In August 1999, custody was transferred once again by MARAD, to the Artship Foundation of Oakland, California who renamed her Artship as part of a failed art colony project.

Artship was sold in 2004 to be scrapped in Texas, but dismantling was halted due to high PCB levels and because she was considered too historic. She is now laid up, and an eventual sale for scrap is possible. People in the city of Berkeley possess interest in saving her. The ship is currently docked at the Mare Island Naval Shipyard as of September 2008.
Links: en.wikipedia.org
1,026 views