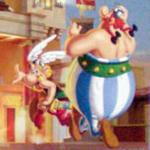 By dda @ 2008-07-03 13:39:06
@ 48.834687, 2.261426
Boulogne-Billancourt, France (FR)
The Adventures of Asterix (French: Astérix or Astérix le Gaulois) is a series of French comic books by René Goscinny (stories) and Albert Uderzo (illustrations). Uderzo has continued the series since the death of Goscinny in 1977. The series follows the exploits of a village of ancient Gauls as they resist Roman occupation. They do so by means of a magic potion, brewed by their druid, which gives the recipient superhuman strength. This is often used for comic effect, as in a recurring sequence where the villagers sally forth from their village to rout the attacking Romans so easily as to consider it great sport. In many cases, this resistance leads the main characters to travel to various European countries (but also Britain, Egypt, America, India and other non-European locations) in every other book, while the remaining are set in and around their village.