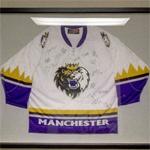 The Monarchs have served as the NHL's Los Angeles Kings' farm club since they began play in 2001. They led the AHL in regular season wins in 2004 and 2007 but have failed to capture a league title, losing in the first round of the playoffs in 9 of their first 11 playoff appearances.

More Monarchs autographed items can be seen on the opposite wall in this scene.
Links: en.wikipedia.org
546 views