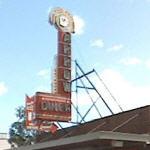 By Parabellum @ 2009-06-28 06:41:51
@ 42.993637, -71.461565
Manchester, New Hampshire (NH), US
The Red Arrow Diner first opened its doors in Manchester, NH back in 1922! The original founder was David Lamontagne. At one point in time, there were a total of 5 Red Arrow locations throughout the city. The name Levi Letendre also goes hand in hand with the Red Arrow. Levi worked for the Red Arrow for many years, then eventually bought it from the Lamontagnes, and ran it successfully until his retirement in 1978. His legacy continues to carry on at the Red Arrow. After a few more owners, and then finally in early 1987, the Red Arrow Diner was for sale and vacant for the first time since 1922. That is when Carol Sheehan purchased it and brought the diner back to life!
Links: redarrowdiner.com
1,224 views