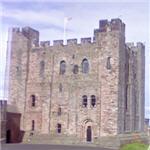 By kjfitz @ 2009-12-03 08:47:32
@ 55.609009, -1.7096
Bamburgh, United Kingdom (GB)
A massive square structure and the oldest surviving part of the castle. Its construction began in 1164 when a sum of £4 is recorded for its erection. Stones quarried three miles away at North Sunderland were carried to Bamburgh on the backs of horses and men. Built by scaffolding to the first storey, the rest of the Keep was built by masons using "over-hand" work. This means the walls overhang a little at each side as they are wider at the bottom than the top.

Built to withstand attack, the Keep's massive walls are between three and four metres thick. Its bottle- shaped doorway allowed soldiers on horseback to enter at a gallop without dismounting.
Links: www.bamburghcastle.com
559 views